Unfortunately, there are two users who were not able to claim their CFG for various reasons: indirect contributions and missed loyalty bonuses.

After several checking and control and despite the proposed solutions to the problem, as well as the comprehensive assistance provided by Centrifuge Ambassadors, Devs, and Team, these users were not able to receive their rewards.

I would like to propose minting the total number of tokens and distributing them to these two eligible users.

The proposal being put forward is the following:

The RFC topic will be open for 7 days.

Looking forward to any feedback and any concerns that you might have with this proposal.

There is no doubt, everyone who contributed to the CFG-crowdloan, locked his DOT and thus showed strong long-term support for the project should receive his/her crowdloan rewards.

This should be done asap

Any explanation, why both users didn’t receive their rewards at first?

Any explanation, why both users didn’t receive their rewards at first?

Sorry for the delay.
Yes, we have an explanation.

One user was not present in the merkle tree and this is the reason why he was not able to claim his rewards.
Another user was system marked as not eligible for the loyalty bonus. Both of us I and Rhano checked trx fee and wallet address and we can confirm that this user should receive a loyalty bonus.

This proposal has moved to a snapshot vote (ex poll)

Please cast your vote via snapshot voting on OpenSquare here .

Remember, that you don’t lose your CFG tokens by voting in a snapshot vote nor are you locking them.

Thanks, everyone for participating in the discussion.

The snapshot vote for this proposal has passed. 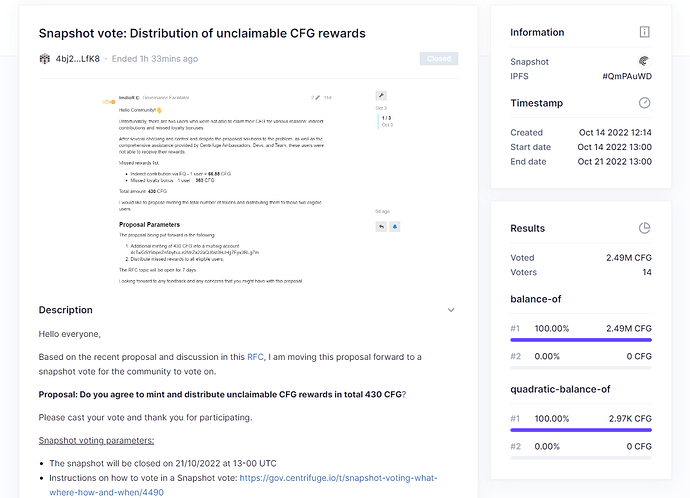 The next step: The Council Motion (or Public Proposal), asking for the required funds, will be created soon.
If the referendum will passes successfully, the funds will be transferred to a proxy account.

We will keep you updated on the progress here in this post.
The Proxy account will be Public in a way that the Community will be able to verify all transactions on Subscan.

Thank everyone for voting and for participating.

We just initiated the Council Motion 44: Distribution of unclaimable CFG rewards . This motion, if passed, will open up a referendum that will stay open for voting for 7 days (50,400 blocks @ 12s/block).