Unfortunately, the previous Council Motion 41 was not correct. Therefore, we are forced to recreate it.
We apologize in advance for this.

The Centrifuge council has proposed a motion for onboarding the first 5 collators on Centrifuge.

See the motion on Subsquare here.

See the motion on Subscan here .

If the motion passes, it will become a referendum, that all token holders can vote on, using their CFG tokens. The referendum will be open for people to vote on for 50,400 blocks (~7 days with an average block time of 12 seconds).

Remember, that you don’t lose your CFG by voting on referenda - they are just locked for the duration of the vote. After that, they will be available for transfer again. You can make your vote count for more by voting with conviction which means that you can vote with up to 6X the amount of tokens you have, by locking them for a longer period of time.

If you want to know how voting with conviction works, you can see a short explanation in this post .

Referendum 21 is now open for all CFG token holders to vote on. You can vote on the referendum either on Subsquare or in the portal.

Vote on Subsquare: Onboarding the first five collators on Centrifuge

Vote in the Portal: Onboarding the first five collators on Centrifuge

Referendum 21 passed with SimpleMajority at block 1568551. 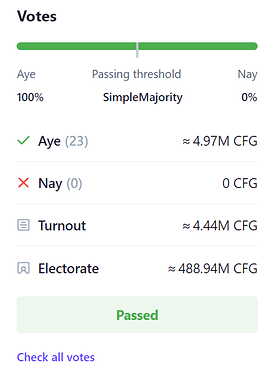 Congratulations to the first five collators who are onboarded and are already producing blocks. You can see all Centrifuge collators in the portal here.