The Centrifuge council has proposed a motion for funding the Credit Group, following this RFC and this poll.

There was a minor mistake made with the decimals when the pre-image was created so the minted amount is set to 43,004 instead of 43,000.4 (a small difference of 3.6 CFG).

See the motion in the portal here (while it is open).

See the motion on Subscan here.

If the motion passes in the council, there will be a public referendum that all token holders can vote on.

Remember, that you don’t lose your CFG by voting on referenda - they are just locked for the duration of the vote. After that, they will be available for transfer again. You can make your vote count for more by voting with conviction which means that you can vote with up to 6X the amount of tokens you have, by locking them for a longer period of time.

If you want to know how voting with conviction works, you can check this short post .

Referendum 18 is now open for all CFG token holders to vote on. You can vote on the referendum either on Subsquare or in the portal.

Vote on Subsquare: Proposal for funding for Credit Group

Vote in the Portal: Proposal for funding for Credit Group

Council Motion 34 was created as an external proposal and there can not be more than one referendum open at any given time, so this was overwritten by the referendum for the Runtime Upgrade (Referendum 17).

Referendum 18 has passed with SimpleMajority at block 1490187. 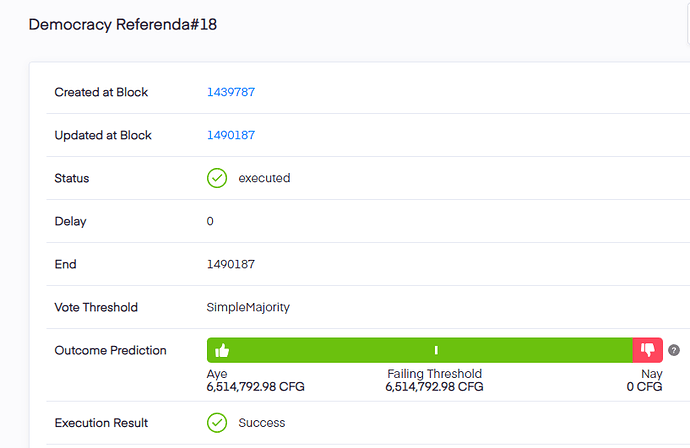 Thank you all for participating and voting!