This motion is being fast tracked at the same time and the council is voting on it now.

See Motion 47 in the portal here (while it is open).

Councillors, please cast your vote at your earliest convenience.

Referendum 23 is now open for all CFG token holders to vote on. You can vote on the referendum either on Subsquare or in the portal.

Referendum 23 has passed with SimpleMajority at block 1719597. 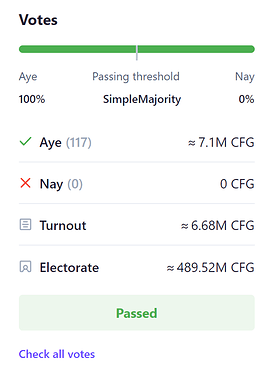 Thank you for voting.