This is a primer for those new to the concept of governance, or those wanting to learn more. Naturally, feel free to post any questions or comments seeking clarification here.

What is governance in Centrifuge?

The system of voting by the community - both off-chain in the forum, and on-chain using tokens in the portal - to make changes to the protocol.

What can be governed?

Who can propose and vote?

CFG token holders and Council Members. Council Members are 7 (or more) elected members voted in by the community who have extra priority when it comes to determining which ideas come to a vote, and weighted voting power.

What is the proposal and voting process?

First Step:Make a Request for Comment (RFC) in the forum
Make a request for comments to stimulate debate

Second step: create a public proposal in the forum that takes a poll-style vote on the proposed change. If this polls sees majority support, the vote should be moved to on-chain referenda.

Step Three: Propose a referenda onchain
During on-chain referenda (at portal.chain.centrifuge.io/ or polkadot.js.org) token holders can vote with their tokens.

The voting is weighted based not only on how many tokens that token holder puts up in support of the referendum, but they can also express extra conviction by staking those tokens in favor of the vote for a longer period of time.

These referenda use quorum voting, which essentially means that there needs to be a good ratio of turnout to votes in order for the referendum to pass. The higher the turnout, the less of a majority is needed for it to pass. The inverse is true as well; the lower the turnout, the more votes are needed for it to pass a majority.

*Note: A referendum can be initiated using 10 CFG in the portal, with or without the need for a public poll on the forum to occur first. However, it is highly encouraged and an important part of the process to promote community participation.

What other ways exist to make proposals?

Another way to make a proposal - especially if you don’t necessarily want to do the legwork of convincing many token holders yourself - is to make a post in the forum with the aim of convincing a Council Member to submit the idea to the Chain Council. When a proposal is initiated in this way, it has an easier path to the referendum stage where token holders can ultimately vote for it on-chain.

When do these referenda become ‘law’?

After a 7-day enactment period - unless fast-tracked by the Council, which will always be announced in the appropriate channels. Referenda come up for a vote every 7 days, prioritized by how much stake is bonded behind it.

And finally, a few things to keep in mind when making proposals and voting: 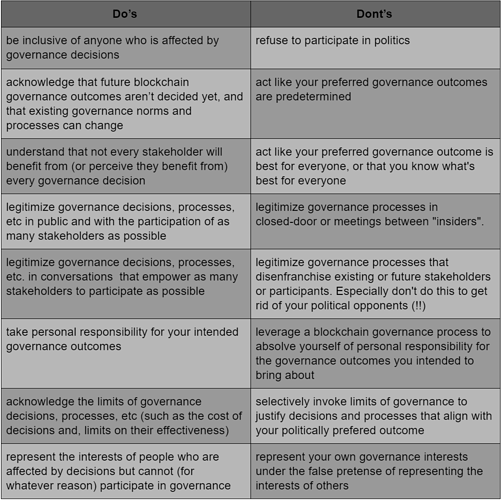 How to Participate in Blockchain Governance in Good Faith (and with Good...

Check out this table that I made, I call it “Some Do’s and Dont’s of Participating in Blockchain Governance in Good Faith”:

Short and clear explanation of what governance is and how the process works - great job!

Is there a thread where potential candidates introduce themselves or how do we get to know them better? Saw Yaroslav put himself forward in Telegram and looks like a good fit.

So far two people have announced their candidacy - you can read more about them here.

If you are interested you can apply for a council seat. The Altair council needs long-term supporters from the community with their drive and knowledge

that sounds like an exciting prospect. i’ll definitely have a serious think about it

Nice one! Thank you for this. Quite clear and easy to understand.