With the conclusion of the poll for the Tinlake LP rewards restructuring this proposal is now ready to be proposed to the council.

Please go ahead and vote.

This has passed and I have now proposed to fasttrack this with a 5 day voting period. This is live as motion 19.

Council Motion 19 (fast track) has passed and there is now a public referendum that all CFG token holders can vote on.

Please vote with your CFG here.

You can see Referendum 7 on Subscan here.

Motion 19 has been closed and the community could vote via public referendum #7:

Remember, that you don’t lose your CFG tokens by voting on referenda - they are just locked for the duration of the vote. After that, they will be available for transfer again. You can make your vote count for more by voting with conviction which means that you can vote with up to 6X the amount of tokens you have, by locking them for a longer period of time. Thank you for your participation and voting.

See Council motion 20 in the portal here (while it is open).

This motion will be followed by another motion to fast-track it and the voting window in the public referendum will be set to 900 blocks (~3 hours with an average block time of 12 seconds).

We are sorry for this inconvenience.

Council Motion 21 to fast track is now being voted on by the Council.

See Council motion 21 in the portal here (while it is open).

Council Motion 21 to fast track was closed too early so it had to be re-opened.

The fast track is now Council Motion 22 and as soon as it has passed, the public referendum will be open for all token holders to vote on.

See Council Motion 22 in the portal here (while it is open).

The vote for Referendum 8 is now open for 900 blocks (~3 hours with an average block time of 12 seconds) so you can use your CFG tokens to vote on it.

You can vote here .

See the referendum on Subscan here.

Referendum 8 has passed with a SimpleMajority at block 960090. 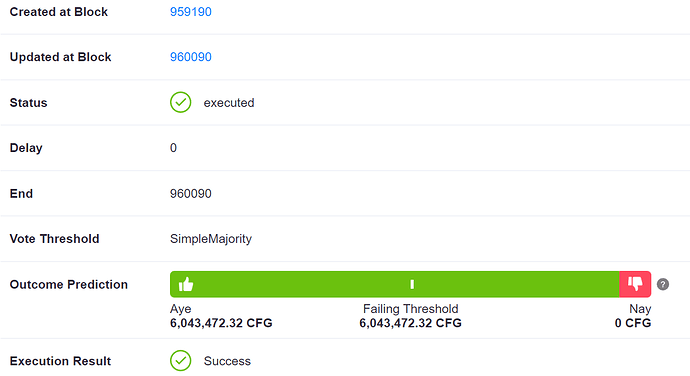 The balance of the Tinlake rewards account has now been set to 5,250,000 CFG and Tinlake users should be able to claim their CFG rewards again now.

The last proposal was implemented ( Council Motion 18: Tinlake LP Rewards Restructuring July 2022 - #12 by Rhano ) and the rewards rates were modified according to the proposal.

The actual wallet balance is 982,177 CFG and with the current TVL and a Rewards Rate of 17,442 CFG/day, this balance will be enough for the next 56 days. The annual issuance with the last modification was set to under 2%.

In order to not go into reward deficit and guarantee/permit regular rewards claiming for Tinlake investors and not to rush, we are planning to return back to the discussion in the middle of September.

The small amount of minting permits us to be flexible with market conditions, TVL and keep the annual issuance under 3.5%.